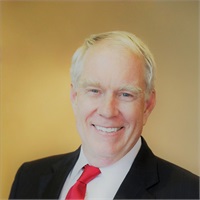 As President and CEO of the firm, Weston Dyer Burnett brings over 17 years of planning experience to his clients. Prior to joining Mark Cohen at OptiFour in 2001, he served on active duty with the Navy as a judge advocate for over 27 years. Since retiring as a senior Captain in 2000, Weston has drawn on his diverse legal perspective and expertise to help individuals, families, and business owners fortify their financial future.

While thriving in matters of law, Weston specializes in helping clients integrate their entire financial lives, uniting their wealth management, tax, risk and legal goals into a strategic and simplified solution. Serving as their fiduciary advocate, Weston is dedicated to providing total transparency with clients and eliminating all conflicts of all interest. He truly enjoys helping clients realize their goals, achieve greater clarity, and enjoy unshakable confidence in their future.

Wes is proud to serve in various leadership roles with George Washington University and its Law School. In April 2010, he was bestowed the George Washington (GW) University Alumni Outstanding Service Award for his exceptional service to the entire GW University community. For the past seven years, he has served on the Law School Dean Board of Advisors. From July 1, 2013, to June 30, 2017, he served as a member of the Board of Trustees of George Washington University. In October 2017, Wes received the Dean's Medallion from Dean Blake Morant for his service as Chairman of the GWU Law School Campaign that raised $70,000,000 for the endowment. This award had previously been awarded to Senator Harry Reid and other distinguished alumni. In April 2017, he became a member of the Board of Trustees of the Navy Marine Coast Guard Residence Foundation, commonly known as Vinson Hall.

Weston's family has a long record of service in uniform to the USA. From his son, Edward, to his brother, nephews, his father and mother, maternal grandfather, and countless other relatives, Weston's family represents multiple generations of service dating back to the Revolutionary War.

Weston lives in Falls Church with his wife of over 45 years, Barbara. An accomplished math teacher, Barbara has taught math from fifth grade through graduate school all over the world. She currently teaches at BASIS Independent in McLean, VA.

Weston and Barbara's son, David, is a distinguished attorney in Manhattan, New York; their second son, Edward, works for the federal government on national security matters, while his wife, Alka Pradhan, is an accomplished human rights attorney; their daughter, Dr. Jennifer Blair Beard, teaches at the University of Virginia, while her husband, JD Beard, is a public defender in Charlottesville.

When not engaged at work, Weston enjoys hiking, cycling, running, stamp collecting, historical reading, and traveling with his family.